I brought a nice although dull looking pair back from my last trip. I put them in my community tank but heard them croak a few weeks ago. So, after the experience with my dwarf croakers I thought it was time to give them a space of their own.

According to some hobbyists this didn't mean anything as the croakers use this as a means of communication and not to let the other sex know they are ready to mate. Plus, they told me 'nothing would happen until Spring as now was not the time for spawning croaking gouramis'.

Anyway, they were in their tank with some pygmy cories as dither fish as they are incredibly shy. I took the cories out after they seemed to be more used to their space and I saw them regularly and they seemed to have taken up residence on the left hand side of the tank close to a piece of driftwood. The male even disappeared into it now and then as one end is like the base of a trunk and hollow.

Last week, the male didn't show up for dinner. I wasn't too worried because he always has been the shiest and he would often only come after the female finished eating. I got more worried as this happened several days in a row and I could not see him anywhere in the tank.

Then on Thursday I decided that I wanted to know what was going on and I basically took the tank apart; got the driftwood out and went systematically through the whole tank with a net. I only found the female and concluded that the male somehow jumped out and that I would do better in buying another male as they happened to be available in one of the local stores.

Last night when I was watching my fish sitting quietly and relaxed on my little stool (I have a fish CLOSET!) and suddenly I almost fell off; I couldn't believe my eyes but a minuscule fry was swimming in that tank! I looked again and I saw another one, and another one. I counted up to 5 very, very small fry.

Panic in the house; 8 pm on a Saturday evening and no appropriate food aka infusoria. No yolksac and so tiny and thin that you would expect them to drop dead any moment. A friend was willing to come out from the other end of the island to bring me java moss as this tank has plants but only some fern and crypts. However, his offer brought me to my senses and I picked out a hand full of moss from my shrimp tank.

Still no sign of the male though.... At a certain moment, I did see the female charging at a female kuehnei betta next door so I thought: 'great! she is taking over care for the fry from the male'.

Just to be sure, I had also put in some 100 - 200 micron sized golden pearls and the idea was to buy Hikari first bites today as these are the only infusoria type fry food I know for sale. I had also written to some Asian fish hobbyists and their answer this morning reassured me. They don't feed the vittatus fry for 3 days and then go immediately to bbs!

I was basically out the whole day and eager to see this evening whether there were still some fry alive. It was then that I witnessed a great event. I had satisfactorily noticed that I still had at least 3 fry and maybe it was just imagination but I had the impression that they were somewhat bigger. And as I was telling myself, maybe I didn't see more as they could be hidden in the java moss. Suddenly I noticed the male approaching the front of the tank! I looked closely at him and thought his mouth looked a bit different than normally. I also noticed that some fins were torn so I blamed it on a rough spawning. He swam under the java moss, opened his mouth and spat out a bunch of fry! Amazing! He had been carrying them over from the nest I presume to that place! Btw: I still don't know where the nest is/was....

Now if you look at pictures from the croaking gourami in internet you will find that most of the males don't have these dots. However, I did find a few pictures of this type and a fellow country man had described in a Dutch forum how he had found this fish on Koh Samui, an island in the south of Thailand. Unfortunately a very similar fish is also found in Johor state in Malaysia (close to the border with Sinagapore) whereas vittatus found in east Malaysia and Penang are considerably different, not to speak about the Vietnamese vittatus that even has a different body shape!

So there are different regional varieties of this species and some males have indeed reddish fins. As these are aquarium trade fish it might well be too that I have a reddish type female and a blueish type male with dots. Hopefully I will be able to raise some fry from them to see how these turn out.

The only decent picture I currently have is from when the female charged at the betta. 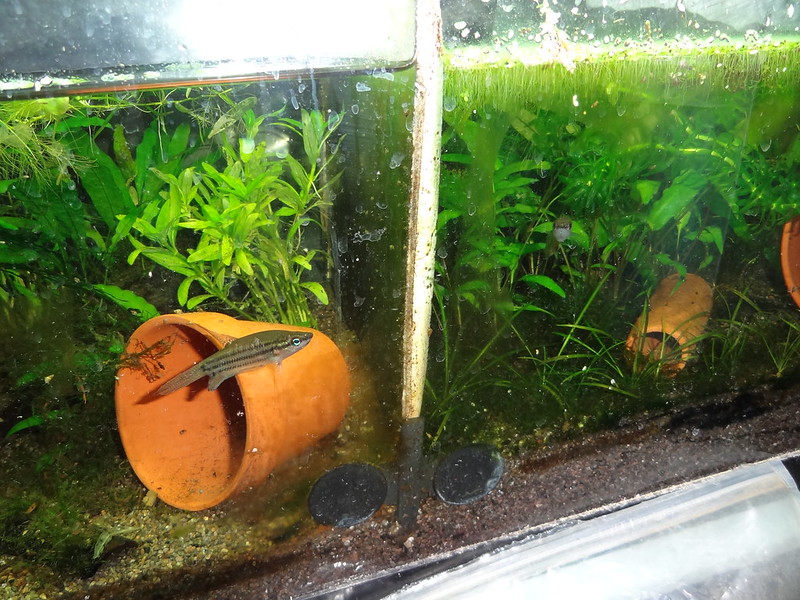 Many of the labyrinth fish are able to turn so pale they become nearly invisible even in relatively clear water. This is true also and especially for breeding males which often reside to partial mouthbreeding when anxious or disturbed. Croakers often form an stable pair bond. Thus, your pair may be spawn for many times to come.

And no, I cannot resist my bit of smarttalking: The gender for the species ist female. So the correct scientific name is Trichopsis vittata. The species and the genus may be revised soon. New forms were discovered, and especially T. vittata could be split up into several species.

Thanks Constantin!
Regarding the different species: I have a friend in south Vietnam that found 'vittata' but it looks considerably different from how we know it to be. He expects it to be a different species but until now it is still classified as such. On 'Seriously Fish' you can nicely see the different varieties according to finding location in their picture gallery.

Last night I took the female out: her tail fin was more ragged than a few days before and although I did not see any visible aggression between the 2 while observing them; I didn't want to take any chances.

The website you mentioned is really informative with currently 29 (!) pictures of fish from different locations and some of their habitats. There's still a lot to do about this species (or group of species).

Kepp up your reporting. We are eager to see the results of your breeding attempts.

There is not much to report; I feed twice a day but the fry are still very small. When I watch closely I can always see a few swimming by but I have no clue what is happening in the java moss or in the back of the tank of course....

obviously I have the same little Problems as you have

I think it is normal that they grow slowly. And in a well structured, planted tank I cannot even guess if there are just a handful samll Trichopsis or dozens of them

have a nice Weekend

I am still seeing 2 fry in the front on a daily basis. I have now hatched bbs and will start feeding that in the hope that I get a better idea of the number of fry that are actually in the tank. Hopefully the bbs will draw them out of their hidings!